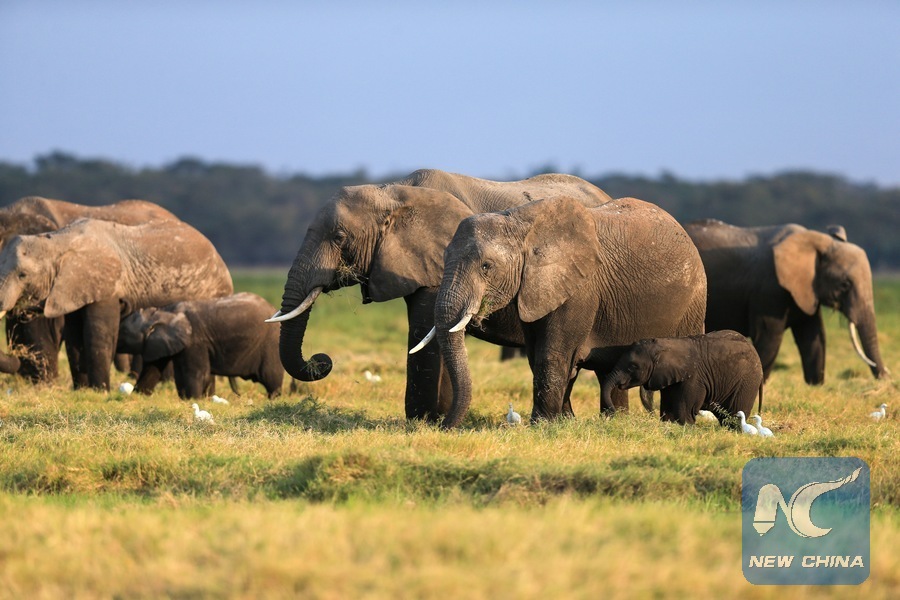 The file photo shows African elephants have their meals at the Amboseli National Park of Kenya, July 16, 2014. (Xinhua/Meng Chenguang)

NAIROBI, March 27 (Xinhua) -- There is need for China and its African allies to kick start a new dialogue aimed at revitalizing wildlife and ecological conservation in the world's second largest continent, a conservationist has told Xinhua in an interview.

Kaddu Sebunya, president of African Wildlife Foundation (AWF), told Xinhua that Beijing is an indispensable partner in efforts to protect Africa's iconic wildlife species that are grappling with human and climatic induced threats to their survival.

"China is playing a big role in Africa's economic development and would like to see it direct more support towards protection of wildlife and vital ecosystems in the continent," Sebunya said.

Sebunya noted that China's growing economic and diplomat clout places it at a vantage position to help advance wildlife conservation agenda in Africa amid rising tide of isolationism from the West.

"Both China and Africa should discuss how to strengthen protection of wildlife and wild lands against a backdrop of infrastructure development and industrialization in the continent," said Sebunya.

Sino-Africa collaboration in wildlife protection was elevated a notch higher during the December 2015 Forum on China-Africa Cooperation (FOCAC) where China announced new support to advance ecological conservation in the continent.

He singled out the decision by China on December 31, 2016 to ban ivory processing and trade until the need of 2017, terming it a milestone in protection of Africa's elephants.

"China's decision to ban ivory trade by the end of 2017 is a game changer in curbing elephant poaching and illegal trade in wildlife," remarked Sebunya.

Sebunya emphasized that a healthy balance between economic development and ecological protection should underpin China's engagement with Africa.

"There is need for a pragmatic approach that ensures economic development is not detrimental to our wildlife heritage and other ecosystems," said Sebunya.

He noted that China's pioneering ecological protection initiatives against a backdrop of rapid industrialization can be emulated by African countries as they chart new development pathways.

"There are big lessons to learn on how China has managed to protect its pandas," Sebunya remarked, adding that African countries can borrow vital lessons from China's mistakes and successes in its quest for economic development.

He added that Africa's conservation lobbies are committed to a robust partnership with Chinese institutions to revitalize wildlife conservation in the continent.