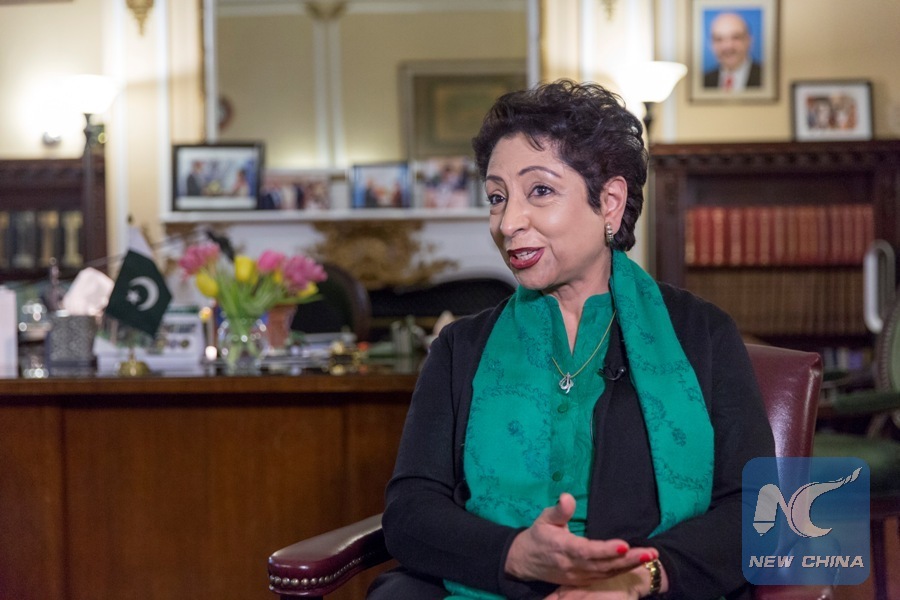 Dr. Maleeha Lodhi, the permanent representative of Pakistan to the United Nations, speaks during an exclusive interview with Xinhua News Agency in New York, the United States, March 28, 2017.(Xinhua/Li Muzi)

UNITED NATIONS, March 31 (Xinhua) -- The Chinese concept of building "a community of shared future for all mankind" is in sync with the fundamental principles of the United Nations (UN) Charter, the top Pakistani diplomat at the organization has said.

The concept was first proposed in the report of the 18th National Congress of the Communist Party of China in November 2012. In the following years, Chinese President Xi Jinping has mentioned and illustrated the concept on various occasions.

In September 2015, Xi proposed the roadmap of building "a community of shared future for all humankind" at a UN summit. In January 2017, he further expounded his concept in a comprehensive, profound and systematic manner at the UN Office in Geneva.

On March 17, the Chinese concept was incorporated into a UN Security Council resolution for the first time.

It is a concept "that brings the people together, that sees the development of all the people to be in the interest of our shared humanity, is one that takes forward the fundamental principles that brought us together at the United Nations," said the Pakistani ambassador.

"So, to take the Charter's principles forward is to ensure also that our development agenda, the development paradigm that we all signed up to, is something that we are able to actually accomplish," she said.

Furthermore, the Chinese concept is very much relevant in today's world, which has witnessed trends of protectionism and anti-globalization, the diplomat said.

"We are troubled by certain trends that we have seen of certain countries looking toward protectionism, eroding the liberal international economic order which has brought so much prosperity to so many people across the world," Lodhi said.

To reverse the trend toward globalization is "to reverse the economic prosperity of all the people," she added.

"We welcome it (the concept), we support it, we are very much part of this initiative because we do believe that this will bring benefit to all the people in our region and beyond," she said.

"I think the initiative is win-win for everyone," she said. "It is one that will help to foster the notion that we have a shared future, and that although we confront common challenges, we also have common opportunities."

She said that her mission will include the Chinese concept in their statements at relevant UN meetings and discussions.

She also served as a member of the UN secretary-general's Advisory Board on Disarmament Matters from 2001 to 2005.

In 1994, the U.S. magazine Time nominated her as one of a hundred people in the world who would help shape the 21st century.