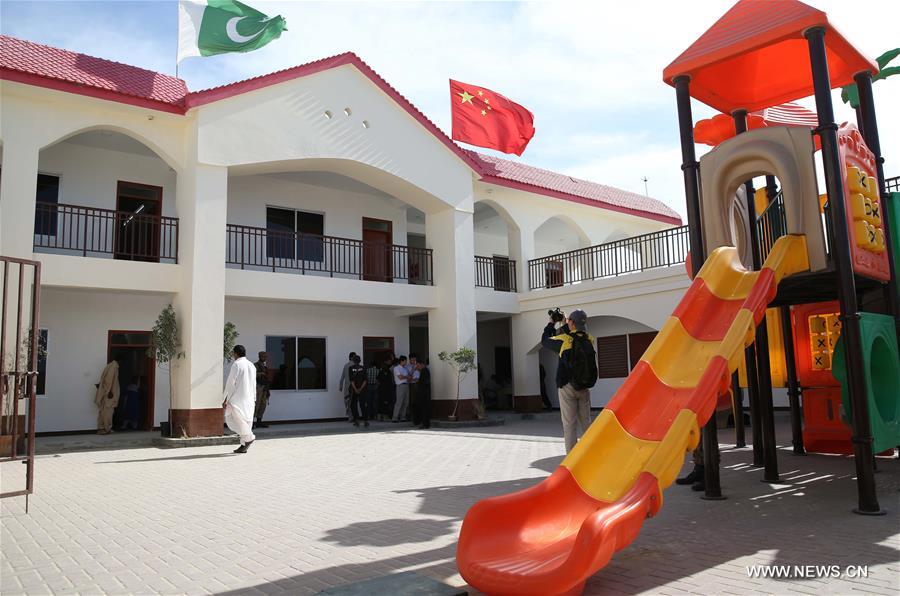 Photo taken on March 22, 2017 shows a China-donated primary school in Gwadar, Pakistan. Gwadar, an poorly-known port town previously in Pakistan has been becoming a new economic engine for the country with the construction of a free zone co-built with China. (Xinhua/Liu Tian)

ISLAMABAD, April 3 (Xinhua) -- Gwadar, an poorly-known port town previously in Pakistan has been becoming a new economic engine for the country with the construction of a free zone co-built with China.

"We have finished 60 percent of the first-phase construction for the port's free zone, which is expected to be completed by the end of this year, one year earlier than we planned," Hu Yaozong, deputy general manager of the Gwadar Free Zone Company, told Xinhua in a recent interview.

Chinese engineers and their Pakistani counterparts are working around clock in the construction site with the hope of seeing the free zone is open to operation as early as possible.

The free zone is a key step towards developing the Gwadar port into an important regional hub that will benefit not only south Asia, but also the countries in central Asia and the Middle East.

The free zone, which covers about 923 hectares of land and will be developed in four phases. It is designed to take advantage of Balochistan's rich fishery and mineral resources to develop relevant industries for overseas market and to develop light industry for the domestic consumption.

As a part of the light industry plan, China's Linyi overseas market, a comprehensive shopping mall project, will soon be introduced into the free zone.

"It is quite alike the renowned Yiwu small commodities market in China. The Linyi market in Gwadar will develop an overseas warehouse so as to make their goods not only available in the Pakistan market, but also in markets around the region," said Hu.

According to Hu, the first round of investment has almost completed with projects on fishery and electric motors settled and business center enterprises moved in.

The second-phase construction of the free zone is featured with a huge stainless steel factory, which, Hu added, would create a considerable number of jobs for locals in Gwadar, which has a population of less than 100,000.

With the further development of the port and free zone, work forces in other villages around Gwadar are expected to flow into Gwadar.

According to the deputy general manager, a training school donated by China will be completed soon. After short-term training, local people are expected to find a position in the developing Gwadar, he said.

Besides Chinese and Pakistani investors, a lot of investors from other countries have come to the GPA to consult on business opportunities in the free zone, he said.

In 2016, the Pakistani government issued a financial act which ensured a 23-year tax exemption policy for the Gwadar free zone in a bid to attract more international investors.

Jan said that as businesspeople have seen the bright future of the Gwadar port, a lot of Pakistani real estate investors came to Gwadar to purchase land.

He said the land prices now in Gwadar are increasing fast and real estate related industries have witnessed real momentum in the small city.

"We feel that Gwadar's free zone area needs further expansion and we have requested for more area," said the official.

"China and Pakistan have an equally long history, but China developed rapidly due to sincere Chinese leadership and now it has become the leading economy in the world. We shall try to maximize our experiences, cooperation and assistance from China to develop our own country and improve common people's lives," Jan told Xinhua.

The development of the Gwadar port is not only in the economic field, but also at a broader social level.

The medical center, which will come into service as early as in May, is designed to carry out basic diagnosis and treatment, conduct small surgeries and emergency rescues.

It will initially be operated by Chinese medical teams and be gradually handed over to the Pakistani side in the future.

In September last year, a China-donated primary school came into use in Gwadar. The school had planned to enroll about 150 pupils, but more than 300 students of different grades attend the school as many locals believed that the school had better teachers and facilities.

"We are very thankful to the Chinese people who have long been very active in Pakistan's infrastructural development. I think our relationship will be further strengthened with the passage of time because of the sincere leadership on both sides," Jan concluded.