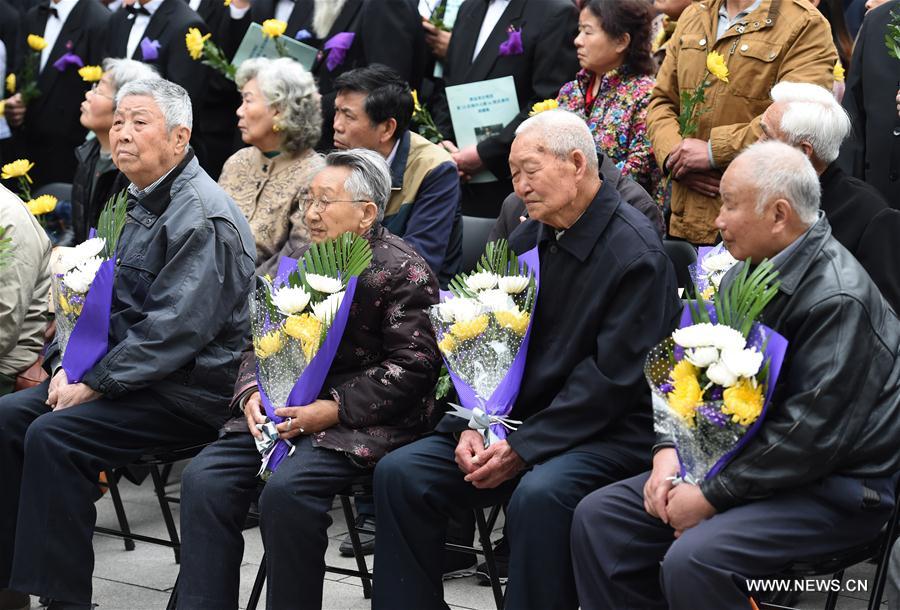 Survivors of the Nanjing Massacre (from right to left, front) Liu Minsheng, Cen Honggui, Wang Xiuying and Pu Yeliang, mourn the victims at the Memorial Hall of the Victims in Nanjing Massacre by Japanese Invaders in Nanjing, capital of east China's Jiangsu Province, April 4, 2017. A mourning ceremony was held here by survivors and family members of victims in the Nanjing Massacre during Tomb-Sweeping Day, or Qingming, when Chinese people commemorate their deceased loved ones by visiting tombs. (Xinhua/Sun Can)

NANJING, April 4 (Xinhua) -- With no tombs to sweep for their deceased relatives, some 50 family members of the victims of the 1937 Nanjing Massacre visited a memorial hall in Nanjing, capital of east China's Jiangsu Province, to pay their respects Tuesday morning.

Tomb Sweeping Day, which falls on April 4 this year, is an occasion for Chinese to mourn the deceased and worship their ancestors.

Eleven survivors of the tragedy also attended the ceremony at the Memorial Hall of the Victims in Nanjing Massacre by Japanese Invaders.

They stood in silent tribute for one minute.

Ge Daorong, 90, one of the survivors, said, "My family has been dead for 80 years and I have missed them painfully for 80 years. We come here not only to remember our deceased family but also to make more people value peace."

Ma Tinglu and Ma Tingbao are brothers. They are also survivors of the Nanjing Massacre. Their father and two uncles were shot to death by Japanese soldiers, who later burned their bodies to conceal the crime.

"We can only come here to worship our ancestors," Ma Tingbao said. "I will tell the history to my descendants."

During the three-day Tomb Sweeping Day holiday, the memorial hall received more than 100,000 visitors. Visitors presented chrysanthemums to the memorial wall to commemorate the victims of the Nanjing Massacre.