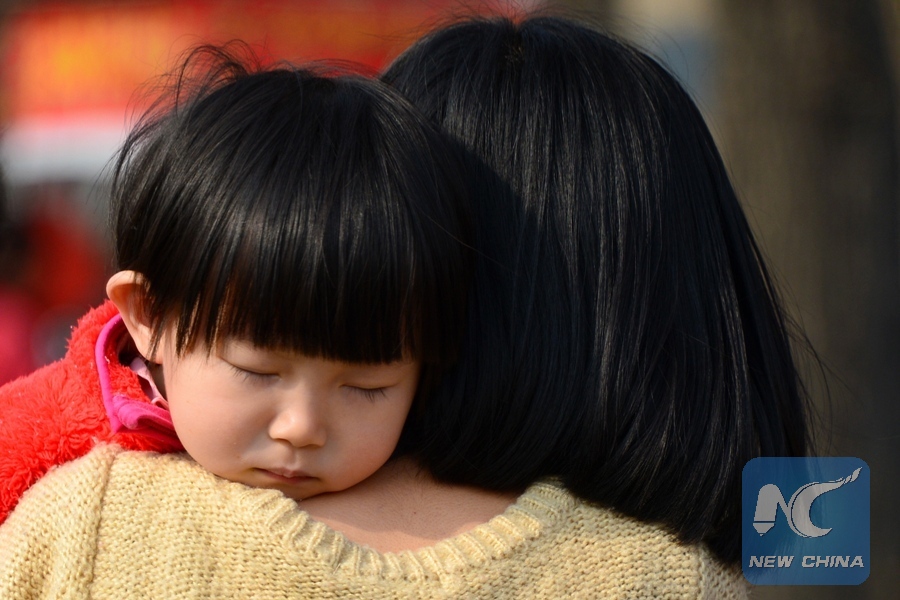 A child sleeps on the shoulder of a woman in Jinan, capital of east China's Shandong Province, March 16, 2015. March 21 is the 15th World Sleep Day. (Xinhua/Guo Xulei)

In a study published in the U.S. journal Science Advances, Jason Gerstner of the Washington State University and colleagues colleagues demonstrated that the gene, called FABP7, plays a role in controlling the sleep quality of mice and fruit flies as well.

"It's the first time we've really gained insight into a particular ... molecular pathway's role in complex behavior across such diverse species," Gerstner said in a statement.

Gerstner first noticed the gene FABP7 when he was a doctoral student at the University of Wisconsin studying genes that change expression over the sleep-wake cycle.

He found that expression of FABP7 changed over the day throughout the brain of mice.

During the current study, Gerstner and his colleagues saw that mice with a knocked out FABP7 gene slept more fitfully compared to normal mice with the gene intact, suggesting the gene is required for normal sleep in mammals.

To see if FABP7 is indeed required for normal sleep in humans, Gerstner and colleagues in Japan looked at data from nearly 300 Japanese men who underwent a seven-day sleep study that included an analysis of their DNA.

It turned out that 29 of them had a variant of the gene responsible for the production of FABP7, and like the mice, they tended to sleep more fitfully.

While these people would get the same amount of sleep as other people, they would wake up more often during the night.

Next, the researchers made transgenic fruit flies by inserting mutated and normal human FABP7 genes into star-shaped glial cells called astrocytes that were previously known to perform many different support roles in the brain, including nutrient delivery and injury repair.

They found flies with the mutated FABP7 gene also woke up more often, similar to what was observed in mice and humans.

"This suggests that there's some underlying mechanism in astrocytes throughout all these species that regulates consolidated sleep," said Gerstner.

While the researchers were excited about finding a gene with an apparently strong influence on sleep, they stressed that other genes are almost certainly involved in the process.