China supports comprehensive, fair probe into use of chemicals as weapons in Syria: envoy 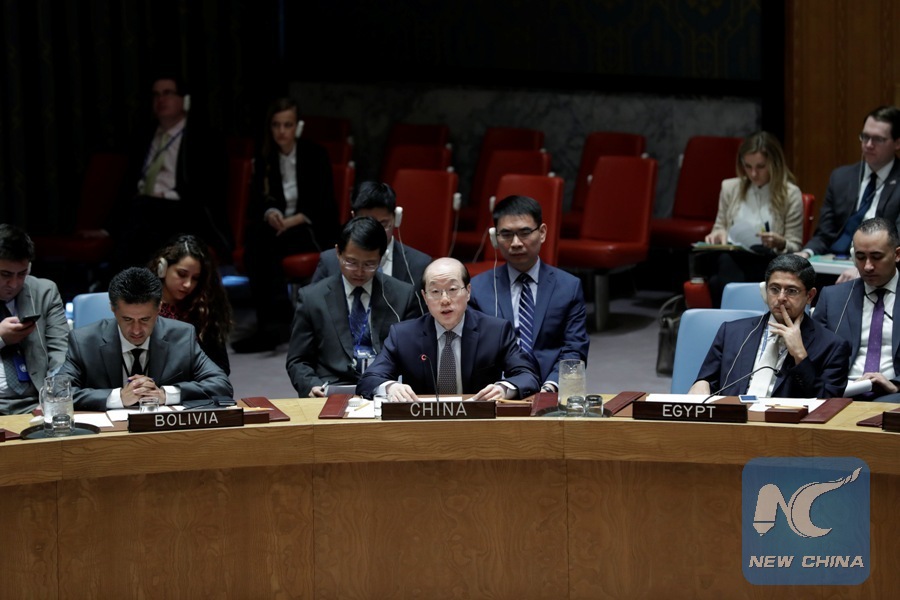 Liu Jieyi (C, front), China's permanent representative to the United Nations, speaks during a Security Council meeting on the situation in Darfur at the UN headquarters in New York, April 4, 2017. (Xinhua/Li Muzi)

UNITED NATIONS, April 5 (Xinhua) -- China supports the Organization for the Prohibition of Chemical Weapons (OPCW) and related UN entities in carrying out comprehensive, objective and fair investigations into uses of chemicals as weapons in Syria, said a Chinese envoy here on Wednesday.

Liu Jieyi, China's permanent representative to the UN, made the remarks at a Security Council emergency meeting on alleged chemical weapon attack in Syria.

It is reported that at least 70 people were killed, 200 others were wounded Tuesday in a gas attack in a rebel-held area in Syria's northwestern province of Idlib.

Liu said that China is "profoundly shocked" by the suspected use of chemicals as weapons which has resulted in enormous civilian casualties.

He said there have been several cases of use of chemicals as weapons in Syria, and therefore China supports OPCW in conducting the probes into all cases so as to reach conclusions based on substantive evidence that can "stand the test of time and facts."

"China firmly opposes the use of chemicals as weapons by any country, any organization or any person under any circumstances," said Liu. "We strongly condemn any attacks against civilians."

"It is essential to hold to account all the related perpetrators and responsible parties in cases of chemical weapons," he added.

Liu also reiterated that political settlement is the only way out of the Syrian question.

"It is the hope of China that all the parties will create conditions for the political settlement rather than creating trouble or difficulties," he said.

The 15-nation council is working on a draft resolution which asks for an inquiry into the alleged attack.

However, due to disagreements among Security Council members, more time is needed for negotiations on the text before it is put to a vote.