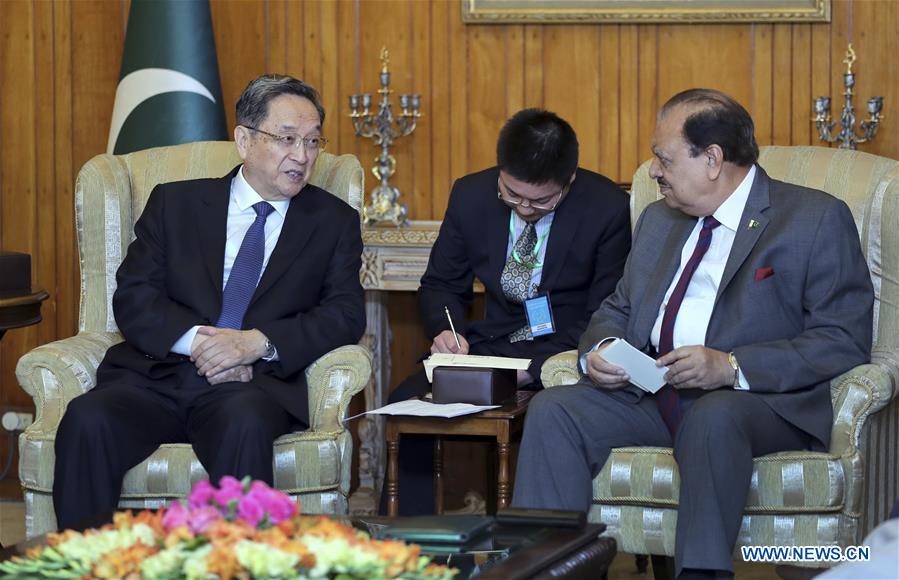 During his meeting with Pakistani President Mamnoon Hussain on Thursday, Yu congratulated the Pakistani president on the 70th anniversary of his country's independence, hoping that Pakistan will achieve greater progresses in national development.

China and Pakistan are true friends and their relations are tested by changing international situation, Yu said, adding that the lifting of bilateral ties to the all-weather strategic cooperative partnership by both sides' leaders in 2015 pointed out the bright direction for the bilateral relationship.

The Chinese top political advisor said the two sides should continuously implement the consensus reached by the leaders of the two countries, keep close high-level contacts, intensify strategic communication and coordination, firmly support each other on issues related to their major national interests, constantly push forward all-round cooperation in all fields and jointly construct the Silk Road Economic Belt and the 21st Century Maritime Silk Road so as to promote the bilateral ties to new heights.

For his part, Hussain said Pakistan-China friendship has a long history with mutual understandings, mutual trust and mutual support.

The Pakistani president said bilateral cooperation in all areas are fruitful, bringing not only benefits to the two peoples, but also actively contributing to the regional peace and stability.

The president said Pakistan firmly supports China's safeguarding of its core and major national interests and is willing to work together with China to continuously push forward the bilateral all-weather strategic cooperative partnership.

Also on Thursday, Yu met with Pakistani Prime Minister Nawaz Sharif, hailing that the bilateral ties have been constantly boosted and the pragmatic cooperation has been further deepened in recent years.

He said the construction of the China-Pakistan Economic Corridor (CPEC) has made important progress with full implementation of a series of significant projects, showing that international cooperation under the Blet and Road Initiative has been fruitful.

Both sides should continue to push forward the construction of CPEC to further develop bilateral cooperation in the fields such as electricity, transportation, port, processing industry and step up cooperation in anti-terrorism, defense and security in order to forge the community of common destiny between China and Pakistan and constantly enrich the contents of China-Pakistan ties, Yu said.

For his part, Sharif said Pakistan and China are close friends and the relations with China are the corner stone of Pakistan's diplomacy.

The Pakistani prime minister said his country is willing to join hands with China to press forward the construction of CPEC by earnestly implementing relevant projects, deepening cooperation in energy, infrastructure and trade, jointly maintaining regional security and stability and enhancing coordination in international affairs.

Yu said the CPPCC is willing to enhance contact with the Pakistani Senate, boost bilateral cooperation in science and technology, culture, education, sanitation and sports so as to make contribution to the economic and social development of the two countries and the friendly and mutual beneficial cooperation between the two sides.

Rabbani said pushing forward the development of Pakistan-China relations is conducive to promoting regional stability and prosperity and accelerating the common cause of the Asian people.

He said the Pakistani Senate is willing to enhance friendly contact with the CPPCC to jointly promote the people-to-people exchanges and mutual beneficial cooperation in all areas.

Also on Wednesday, Yu met with acting Speaker of Pakistani National Assembly Javed Abbasi, saying the CPPCC is willing to deepen exchanges and cooperation with the National Assembly of Pakistan and push forward the two countries' political parties and all sectors of society to offer advices and suggestions on improving cooperation so as to create a better public opinion basis to develop bilateral ties.

During his visit, Yu also held a meeting with representatives from Chinese enterprises in Pakistan and required all the Chinese companies to fulfil their works, abide by Pakistani laws and regulations, respect local customs, advance China-Pakistan friendship so as to achieve mutual benefit and win-win situation and economic development of Pakistan.