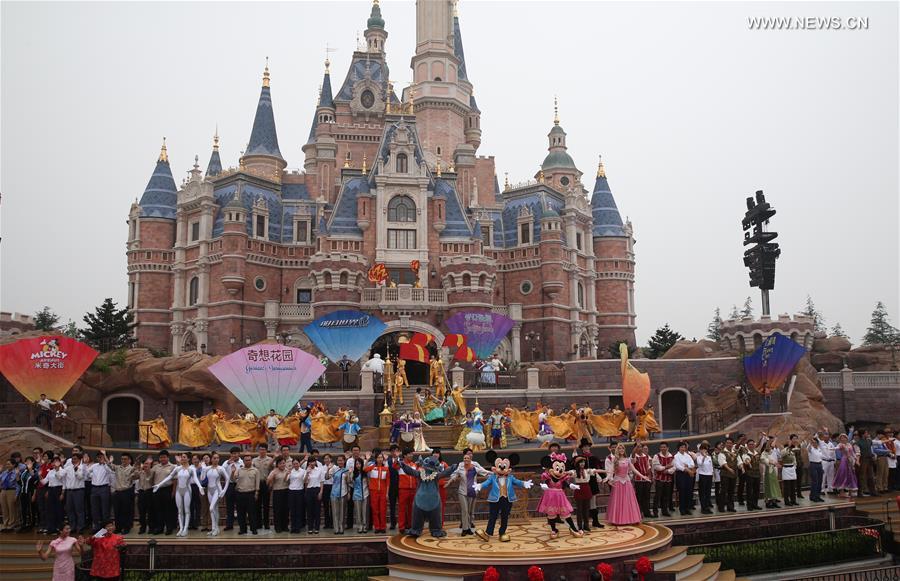 SHANGHAI, April 6 (Xinhua) -- In addition to 600 million yuan (87 million U.S. dollars) in box office sales in China so far, the Hollywood blockbuster "Beauty and the Beast" has given rise to countless hot-selling products.

Tina Dai, a merchandise team member at Shanghai Disney Resort, said the resort is planning to restock the ceramic teacups, based on one of the characters in the movie, which sell for 85 yuan each.

While China is shifting its growth engine from the industrial to the service sector, U.S. companies are exploring new growth points.

Global coffee chain Starbucks is among the beneficiaries of the huge Chinese market.

The robust sales growth is partly due to cooperation between Starbucks and Chinese Internet giant Tencent, which has offered mobile payment services for Chinese customers since December.

The two companies have also rolled out a digital gift-giving service on WeChat, allowing WeChat users to send and receive Starbucks digital gifts and then cash them in at offline outlets.

Starbucks is the first retail brand to use the digital gift-sharing service, supported by the social network's 846 million monthly active users.

While China is developing a consumption-driven economy, many sectors such as logistics services will improve to better serve Chinese consumers, David Bell, a business professor with the Wharton School at the University of Pennsylvania, said while visiting Shanghai Jiaotong University last month.

Prime members will receive their packages from around the world within five to nine working days by air delivery and other time-saving procedures. Regular customers have to wait between two weeks and a month for cross-border delivery, said Zhang Wenyi, president of Amazon China.

Zhang said the number of active users in China as of the end of 2016 was 23 times the number in 2014, and more and more Chinese sellers are seeking fortunes in the overseas market via Amazon.

For example, ILIFE, a robotic cleaning device developed by a Shenzhen-based company, is ranked in third place among similar products in the U.S. market, said Zhang, without disclosing the sales volume or revenue.

"We have seen huge market potential with more and more Chinese customers buying from around the world on e-commerce platforms, and more and more American customers choosing quality products made in China," he said.

Gan Chunhui, deputy head of the China Society of Industrial Economics, said the consumption-driven economy developing in China not only means rising demand for consumption and services, but also will help promote upgrades throughout the industrial chain

American projects in China, for example, have benefited the traditional manufacturing industry elsewhere so that other countries may also participate in the new economy, said Gan.

Many of the ceramic products sold at Shanghai Disneyland, for example, are manufactured in Thailand.

"With value-added products based on intellectual property, traditional manufacturing will release new vitality," he said.