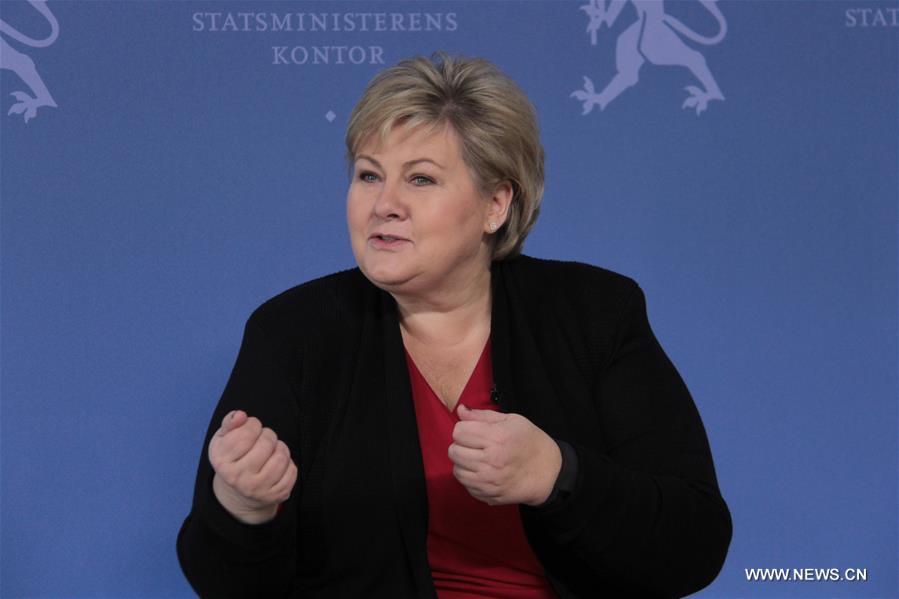 OSLO, April 6 (Xinhua) -- Norwegian Prime Minister Erna Solberg said Thursday she was looking forward to her visit to China and discussing bilateral cooperation in various fields with the Chinese leadership, business people and others.

"First of all, I think it is great to be invited to go to China and to have meetings on political level and also with businesses and others," Solberg said in an interview with Chinese journalists on the eve of her trip to China.

Solberg, who will pay an official visit to China from Friday to Tuesday at the invitation of Chinese Premier Li Keqiang, said there are new opportunities for her country and China to increase cooperation after six years of frozen relations.

"Of course six years is a long time without this type of political cooperation and we are happy that we are now into normalization of the relations between Norway and China," Solberg said.

"I am looking forward (not only) to discussing a whole range of political issues with the Chinese leadership, but also to seeing how we can increase cooperation between Norwegian and Chinese businesses, universities and the whole societies," she said.

China-Norway relations deteriorated since the Oslo-based Nobel Committee conferred the 2010 Nobel Peace Prize on convicted Chinese criminal Liu Xiaobo. Liu was sentenced to 11 years in jail on Dec. 25, 2009 after a court in Beijing convicted him of engaging in activities designed to overthrow the government.

On Dec. 19 last year, China and Norway issued a statement in Beijing on the normalization of ties. "The Norwegian side is fully conscious of the position and concerns of the Chinese side and has worked actively to bring bilateral relations back on track," the statement said.

The Norwegian prime minister said the fact that the two countries have different layers of cooperation provides the basis for maintaining the long-term development of their relations in a stable and healthy way.

She pointed out that Norway and China could have important cooperation "on a whole range of issues," such as the Arctic, ocean, innovation and maritime activities.

Solberg said she was happy to see China become an observer country at the Arctic Council, an inter-governmental forum addressing issues faced by the Arctic region, and follow its discussions.

"I think the Arctic is an important area," Solberg said, adding that the seaway passing the Arctic region is a much shorter route connecting Norway and China than the one stretching to the Suez Canal in Egypt.

On the Sino-Norwegian trade relationship, Solberg said both sides are working to restart the negotiations on a bilateral free trade agreement, which "will be very good for both countries" in terms of trade and job creation.

She said a large group of Norwegian business people, including those from the Nordic country's biggest companies, will be in her entourage to seek new cooperation opportunities with their Chinese counterparts.

On the importance of people-to-people contacts and cultural exchanges, Solberg said she was glad to "see a growing number of Chinese tourists coming to Norway, especially when they come in winter time to experience the Northern lights."

"I had the joy of seeing Henrik Ibsen's play in Beijing 11 years ago with a Norwegian actress from my hometown playing in a Chinese ensemble, seeing how you can relate and interpret what is Norwegian cultural background into a Chinese one," Solberg said. "I think it has built some understanding on different cultures."

She also said that Norway, as a country which is good at winter sports and which has once held the Winter Olympic Games, is ready to cooperate closely with China, the host of the 2022 Games.

On the two countries' cooperation at the international level, Solberg said it is important for Oslo and Beijing to work together on the Sustainable Development Goals, a set of 17 "global goals" spearheaded by the United Nations.

Solberg also said she appreciates very much that the Chinese leadership has been "outspoken on the fact that we have to have multilateral organizations that function."

"For a small country, multilateral organizations and international rules and regulations are very important," she said.

The Norwegian prime minister also spoke highly of the important speech Chinese President Xi Jinping made at the annual meeting of the World Economic Forum in Davos, Switzerland, earlier this year.

"I appreciate President Xi's speech very much. I think it was a very timely speech because somebody has to speak up for international rules and regulations," Solberg said.

"I think it is great that China is now so firmly saying that multilateral organizations (and the) international trade system have to function" at a time when anti-globalization and trade protectionism are on the rise around the world, she said.

The prime minister said it has been proven that many counties have achieved development through international trade while protectionism would lead to more poverty.