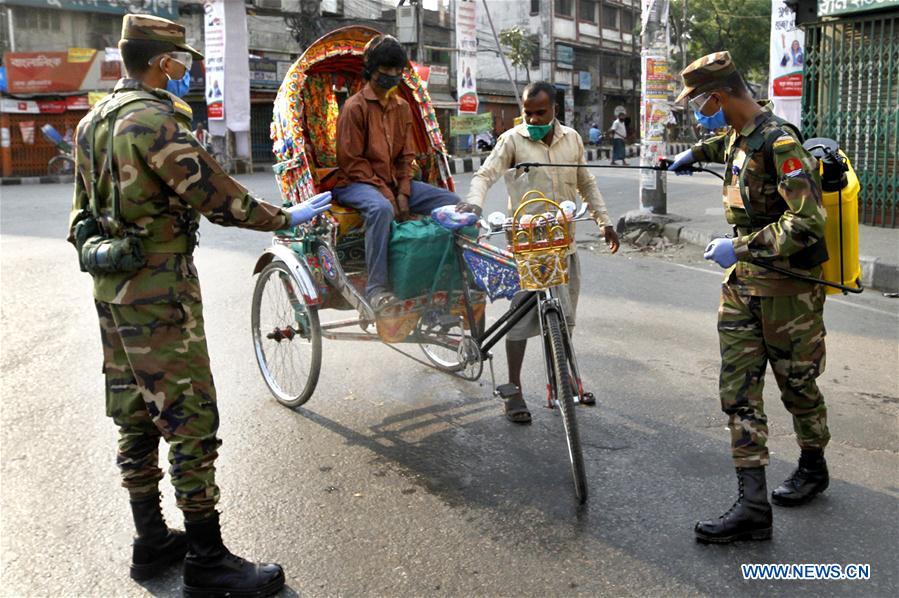 Soldiers spray disinfectant in Dhaka, Bangladesh, on April 2, 2020. The number of confirmed cases of COVID-19 in Bangladesh rose to 56 on Thursday, and the country's death toll remains unchanged at six. (Str/Xinhua)

DHAKA, April 2 (Xinhua) -- The number of confirmed cases of COVID-19 in Bangladesh rose to 56 on Thursday, and the country's death toll remains unchanged at six.

The cases increased by two since Wednesday and no more deaths were reported Thursday, MD Habibur Rahman, director of Management Information System at Bangladesh's Directorate General of Health Services, said in a press conference.

Both the new patients are male - one is about 40 years old and the other in his 70s, said Rahman.

He said samples from 141 persons were tested in the last 24 hours.

The official said they are planning conduct test of at least 1,000 samples of suspected COVID-19 patients by Friday.

"Increase in numbers to the amount of testing will help us better understand the country situation," he said, adding "we're trying to increase the number of tests as much as possible."

Currently the official said a total of 78 people are being kept in isolation.

A sixth death in Bangladesh attributed to the COVID-19 pandemic was confirmed Wednesday.

Bangladesh on March 25 announced the country's fifth death related to the COVID-19.

An official had earlier said 26 patients have recovered so far in Bangladesh.