Xi and his unremitting call for global health cooperation 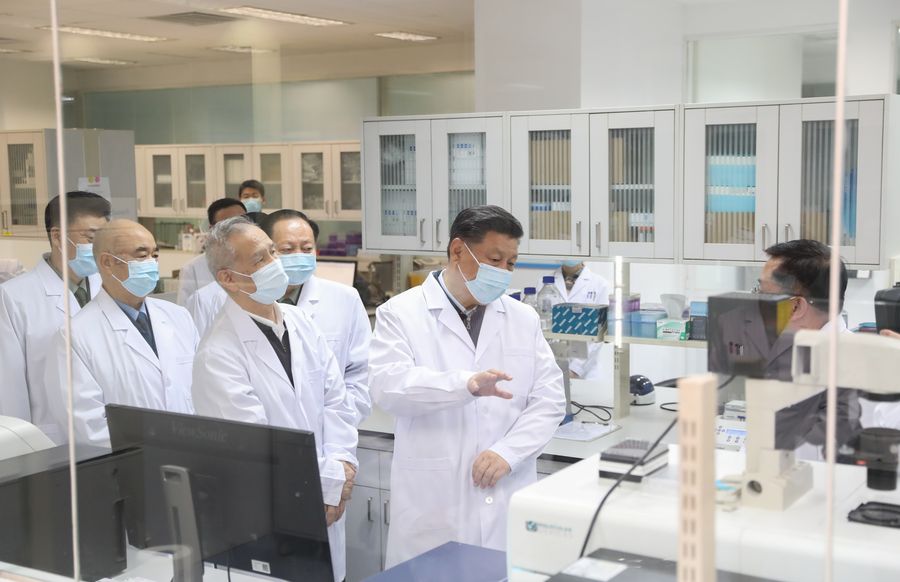 Chinese President Xi Jinping, also general secretary of the Communist Party of China Central Committee and chairman of the Central Military Commission, learns about the progress on the vaccine and anti-body during his visit to the Academy of Military Medical Sciences in Beijing, capital of China, March 2, 2020. (Xinhua/Ding Haitao)

His remarks on global public health in recent years, especially in the last few months, have become particularly meaningful as countries worldwide mark the 2020 World Health Day on Tuesday amid a raging COVID-19 pandemic. 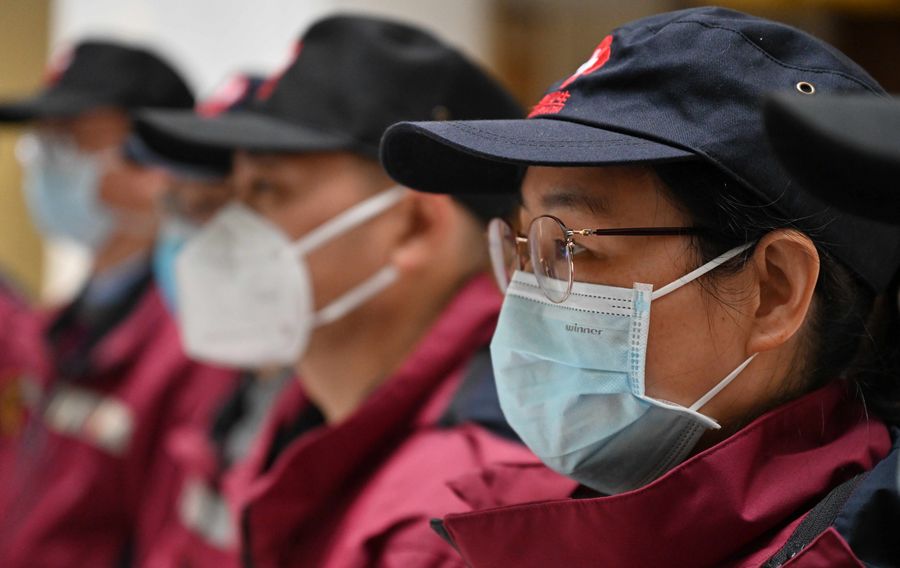 Back in 2013, during a meeting with then World Health Organization (WHO) Director-General Margaret Chan in Beijing, Xi said China will continue to improve public health and enhance cooperation with the WHO.

He also expressed his hope that China and the WHO could work closer to help promote Chinese medicine and medical products into overseas markets, and jointly assist African countries to improve their disease control and public health systems to meet the United Nations Millennium Development Goals.

In March 2015, Xi pointed out in a meeting in China's Hainan province with Bill Gates, co-chair of the Bill & Melinda Gates Foundation, that preventing and controlling public epidemics is a common challenge to the international community and requires strengthening international cooperation on joint control.

Two years later, during his trip to Switzerland, Xi paid a special visit to the WHO headquarters, in which he co-witnessed with Chan the signing of a memorandum of understanding between China and the WHO pledging to step up health cooperation under the framework of the China-proposed Belt and Road Initiative.

During the meeting with Chan, Xi noted that China stands ready to enhance cooperation with the WHO in implementing the 2030 Agenda for Sustainable Development and assisting other developing countries.

Also in 2017, in his congratulatory letter to a meeting of BRICS countries' health ministers, Xi called on relevant parties to study work in the field of traditional medicine and make joint efforts to tackle public health challenges.

"It is our common good vision that everyone enjoys good health," he said in the letter. 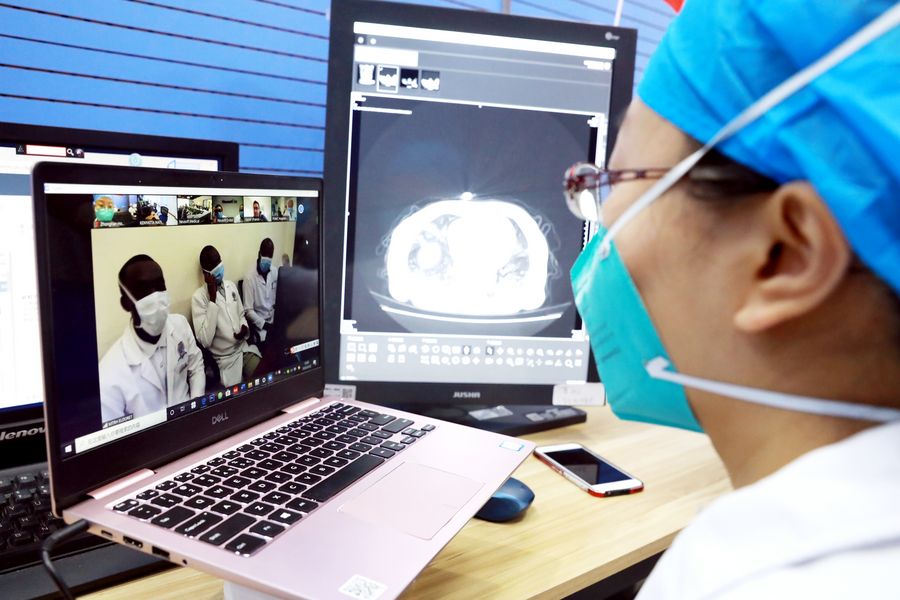 In the past several months of 2020 which witnessed a hike in global caseload of COVID-19 infections, Xi has taken each opportunity to reiterate his call for global public health cooperation against the virus.

When meeting with visiting WHO Director-General Tedros Adhanom Ghebreyesus in Beijing in January, Xi said China attaches great importance to the cooperation with the WHO, and is ready to work with the organization as well as the international community to safeguard regional and global public health security.

In February, in a reply letter to Gates, Xi said "we are resolute in protecting the life and health of the people of China, and of all countries around the world. We are determined to do our part to uphold global public health security."

In March, when the global anti-virus fight entered a critical stage, Xi highlighted the need for international health cooperation not only in several domestic meetings on epidemic prevention and control, but also in phone conversations with foreign leaders and heads of international organizations, as well as in such global events as the Extraordinary G20 Leaders' Summit.

On March 12, Xi spoke with United Nations (UN) Secretary-General Antonio Guterres over phone, and urged the international community to take urgent action and carry out effective international cooperation in joint prevention and control, so as to form a strong concerted force to beat the disease.

China stands ready to share its experience with other countries, carry out joint research and development on drugs and vaccines, and offer as much assistance as it can to countries where the disease is spreading, Xi said. 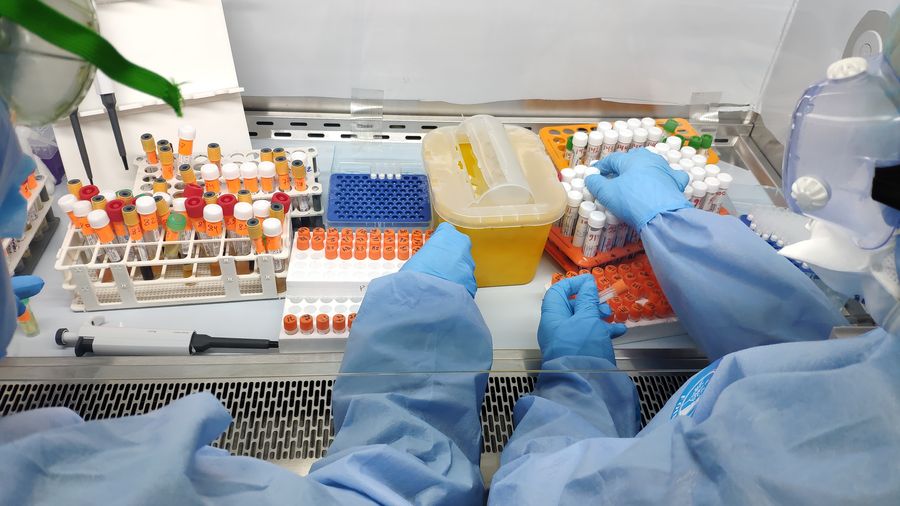 Several days later, speaking at a meeting of the Standing Committee of the Political Bureau of the Communist Party of China Central Committee, he required closer cooperation with the WHO to strengthen the analysis and prediction of the changes in the global epidemic situation, and improvement in strategies and policies to cope with imported risks.

On March 21, in a phone conversation with his French counterpart, Emmanuel Macron, Xi pointed out that public health security is a common challenge faced by humanity.

China, he said, is willing to make concerted efforts with France to enhance international cooperation in epidemic prevention and control, support the UN and WHO playing a core role in improving global public health governance, and build a community of common health for mankind.

Three days later, talking with Kazakh President Kassym-Jomart Tokayev over phone, Xi said in the battle against the current global public health crisis, the urgency and significance of building a community with a shared future for mankind have become even greater.

On March 26, in his keynote speech at the Extraordinary G20 Leaders' Summit via video, Xi said at such a moment, it is imperative for the international community to strengthen confidence, act with unity and work together in a collective response.

He called on G20 members to jointly help developing countries with weak public health systems enhance preparedness and response, and enhance anti-epidemic information sharing with the support of WHO and to promote control and treatment protocols that are comprehensive, systematic and effective. ■