Video: The online snippet recorded by a bystander in Minneapolis, the biggest city in the Midwest state of Minnesota, on May 25, 2020, shows a white police officer holding George Floyd down with a knee on his neck though the black man in his 40s repeatedly pleaded, "I can't breathe," and "Please, I can't breathe." (Xinhua)

WASHINGTON, May 28 (Xinhua) -- In the wake of the death of George Floyd in police custody, protests have continued after turning violent on Wednesday night with fires burning and businesses looted in Minneapolis, the biggest city in the midwest state of Minnesota.

Demonstrations over his death also spread to some other U.S. cities including Los Angeles and Memphis, local media reported.

Floyd died on Monday evening shortly after a white police officer held him down with a knee on his neck though the black man in his 40s repeatedly pleaded, "I can't breathe," and "please, I can't breathe." The police officer's way of handling the man is not approved by the local police department.

Protesters gathered for a second night Wednesday evening in Minneapolis. Videos on social media showed that some demonstrators grew violent, looting a Target and Cub Foods supermarket, setting fire to an Auto Zone, and smashing the windows of other nearby businesses.

"The situation near Lake Street and Hiawatha in Minneapolis has evolved into an extremely dangerous situation," Minnesota Governor Tim Walz tweeted last night. "For everyone's safety, please leave the area and allow firefighters and paramedics to get to the scene." 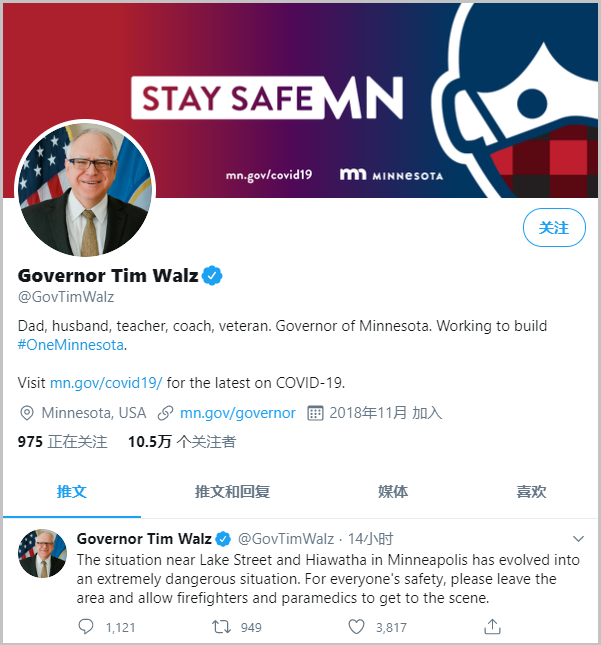 A sreengrab from Minnesota Governor Tim Walz's Twitter account on May 28, 2020, shows he tweeted on Thursday that "The situation near Lake Street and Hiawatha in Minneapolis has evolved into an extremely dangerous situation. For everyone's safety, please leave the area and allow firefighters and paramedics to get to the scene." (Xinhua)

The Minneapolis Fire Department said in a statement Thursday that firefighters responded to approximately 30 fires overnight, including at least 16 structure fires. No civilians or firefighters were injured in the blazes.

Footage showed buildings on fire in Minneapolis in the early hours of Thursday. A report by The Wall Street Journal said residents took morning walks over broken glass and a McDonald's was recognizable only by its salvaged drive-through menu after the riot.

On the edge of the shopping plaza that included the looted Target, a resident told local media she had been sitting in her car since before sunset, just in case she needed to leave quickly. "We're afraid to go to bed," said the woman, who declined to give her name. "I've never seen this."

Amid the riot, the owner of a nearby pawn shop shot and killed a person suspected of looting his building. Police are investigating the shooting with one suspect in custody.

A video shared on Twitter by Minnesota Public Radio photojournalist Evan Frost showed people gathering again outside local police's Third Precinct by mid-morning. Officers stood with face shields around the building and on its roof.

Minneapolis Mayor Jacob Frey called for the city to remain calm in a plea to his residents overnight.

The mayor and Floyd's family on Wednesday called for the arrests of the officers involved in his death, and federal authorities on Thursday promised a "robust criminal investigation." 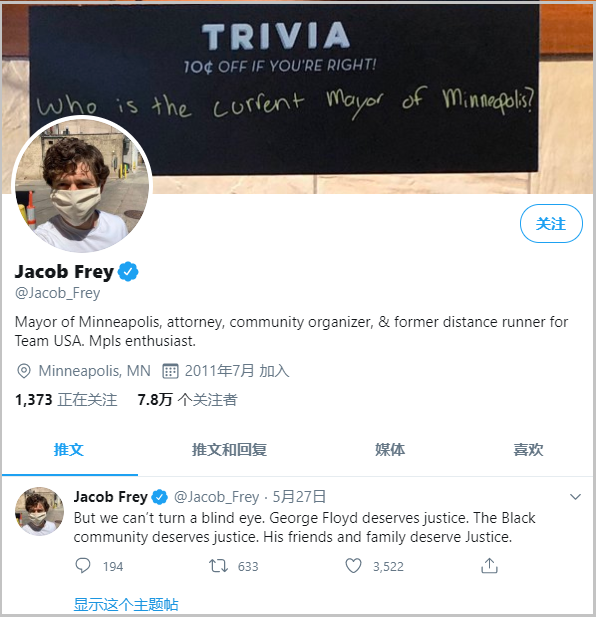 A sreengrab from Minneapolis Mayor Jacob Frey's Twitter account on May 28, 2020, shows he tweeted on May 27, 2020, that "George Floyd deserves justice. The Black community deserves justice. His friends and family deserve justice." (Xinhua)

The four officers involved in the case were fired shortly after a video recording Floyd's death went viral on social media on Tuesday, sparking a national outcry for justice. Minneapolis police's statement about Floyd's arrest said that "he physically resisted officers" after getting out of the vehicle, but the video showed two officers grabbing Floyd and pulling him from a vehicle as they put handcuffs on him.

In Los Angeles, demonstrators marched on a major freeway and at least one protester was injured after falling off a moving police car, said the report of The Wall Street Journal.

"The death of Mr. Floyd is deeply disturbing and should be of concern to all Americans," the Major Cities Chiefs Association, which represents the heads of police departments in largest U.S. cities, said in a statement on Wednesday. 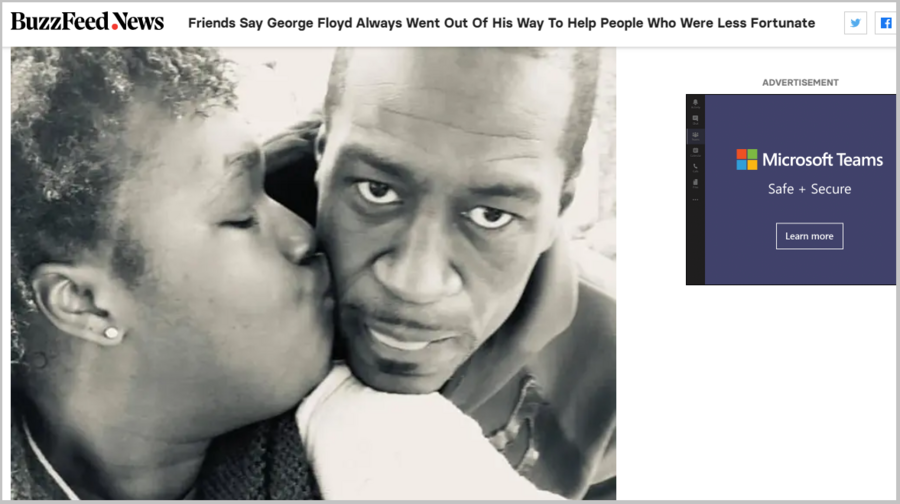 A sreengrab from buzzfeednews.com on May 28, 2020, shows an undated photo of George Floyd (R) and the title of its report "Friends Say George Floyd Always Went Out Of His Way To Help People Who Were Less Fortunate." (Xinhua)

Floyd's death evoked the country's memory about the case of Eric Garner. In 2014, a cellphone recorded Garner, an unarmed black man, repeatedly saying "I can't breathe" when a New York officer held him in a chokehold before his death in police custody. Since then, the plea has become a rallying cry at demonstrations against police misconduct across the country. ■