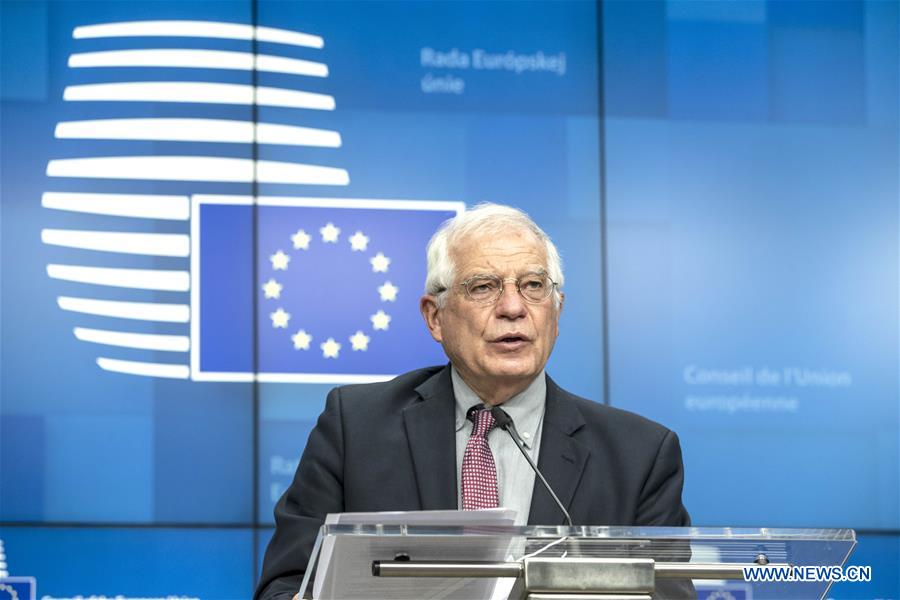 EU's High Representative for Foreign Affairs and Security Policy Josep Borrell speaks during a press conference after a meeting of the EU Foreign Affairs Council at the EU headquarters in Brussels, Belgium, on July 13, 2020. Foreign ministers of the European Union on Monday condemned the Turkish decision to convert Istanbul's iconic Hagia Sophia back to a mosque, saying that "will inevitably fuel mistrust, promote renewed divisions between religious communities and undermine efforts at dialogue and cooperation." (European Union/Handout via Xinhua)

BRUSSELS, July 13 (Xinhua) -- Foreign ministers of the European Union on Monday condemned the Turkish decision to convert Istanbul's iconic Hagia Sophia back to a mosque, saying that "will inevitably fuel mistrust, promote renewed divisions between religious communities and undermine efforts at dialogue and cooperation."

Turkish President Recep Tayyip Erdogan on Friday denounced rising criticism over Ankara's intention to convert the Hagia Sophia museum into a mosque, claiming that "The accusations against our country on the Hagia Sophia mean a direct attack on our sovereignty rights."

"We will continue to protect the rights of Muslims, the dominant faith in our country, and those of other religions," Erdogan said Friday in Istanbul.

Monday's meeting was the first physical get-together of EU foreign ministers since the coronavirus pandemic. Turkey topped the agenda of the 27-member bloc, which reached "a consensus among member states that EU-Turkey relations were currently under strain because of worrying developments affecting the EU's interests."

The EU foreign ministers also called for what they say is "illegal" and "unilateral" drilling by Turkey in the Eastern Mediterranean to stop and asked Turkey to contribute actively to a political solution in Libya and to respect the commitments it had taken, including the UN arms embargo.

Hagia Sophia is an iconic Byzantine church built in the 5th century. Throughout the centuries, the former Greek Orthodox Christian church had also served as a Roman Catholic cathedral and an Ottoman mosque as the city changed rulers. Since 1935, the 1,500-year-old Hagia Sophia has been open as a museum. It has been recognized by UNESCO as a monument of world cultural heritage since 1985.

On Friday, the Turkish State Council reached a verdict on the fate of the monument and Erdogan announced that the first Muslim prayer at the site will be held on July 24.

On Monday, Russian President Vladimir Putin and Erdogan discussed in a phone conversation developments in Syria and Libya, as well as the fate of Hagia Sophia, the Kremlin said.

The United States said on Friday that it was "disappointed" by the Turkish government's decision of changing the Hagia Sophia museum into a mosque.