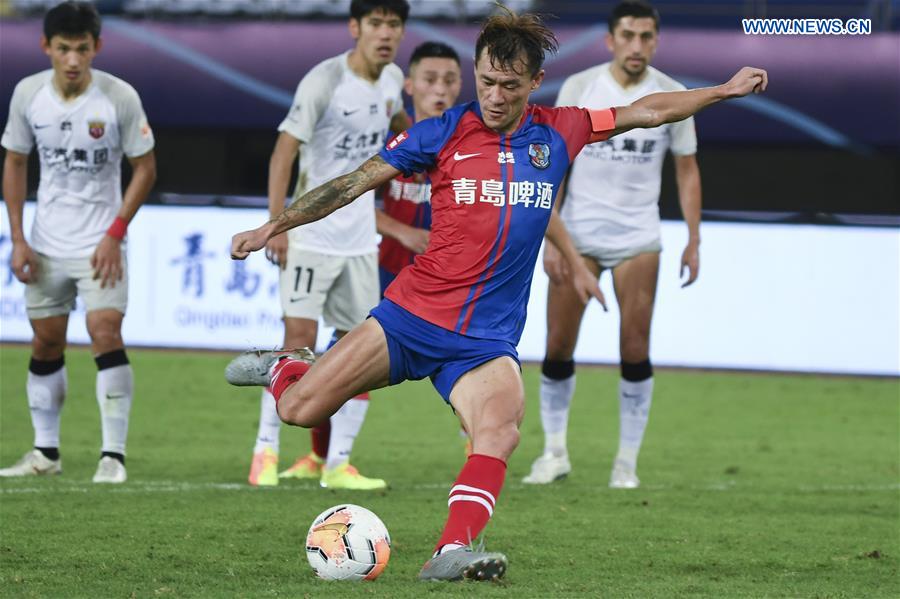 SUZHOU, China, Aug. 6 (Xinhua) -- Two penalties tied the game between Shanghai SIPG and Qingdao Huanghai 1-1 in the third round of the Chinese Super League (CSL) here on Thursday.

The first half was a lackluster one with both sides' attempts to attack turning out to be ineffective.

Assisted by a Ricardo Lopes' cross, Austrian striker Marko Arnautovic skipped through Qingdao's goalkeeper to score a goal on the 49th minute, but his effort was ruled out for offside.

The first valid goal of the game did not arrive until the 66th minute. Shanghai defender Wei Zhen brought down Romain Alessandrini inside the box, making the referee send him off the pitch and award Qingdao a penalty. Veteran Wang Dong smashed in a spectacular volley to make it 1-0 for his team.

Shanghai responded with another penalty just before the injury time to pull one goal back. The battle between Alessandrini and Shanghai striker Li Shenglong in the penalty area on the 88th minute gifted the SIPG side a late penalty. Oscar dos Santos Emboaba Junior then drove the ball comfortably to the corner of the net.

"The arrival of head coach Wu Jingui injected fresh blood into our team. We completely followed the tactics arranged by the coaching group and did well today," said Qingdao defender Liu Jiashen after the game. Enditem