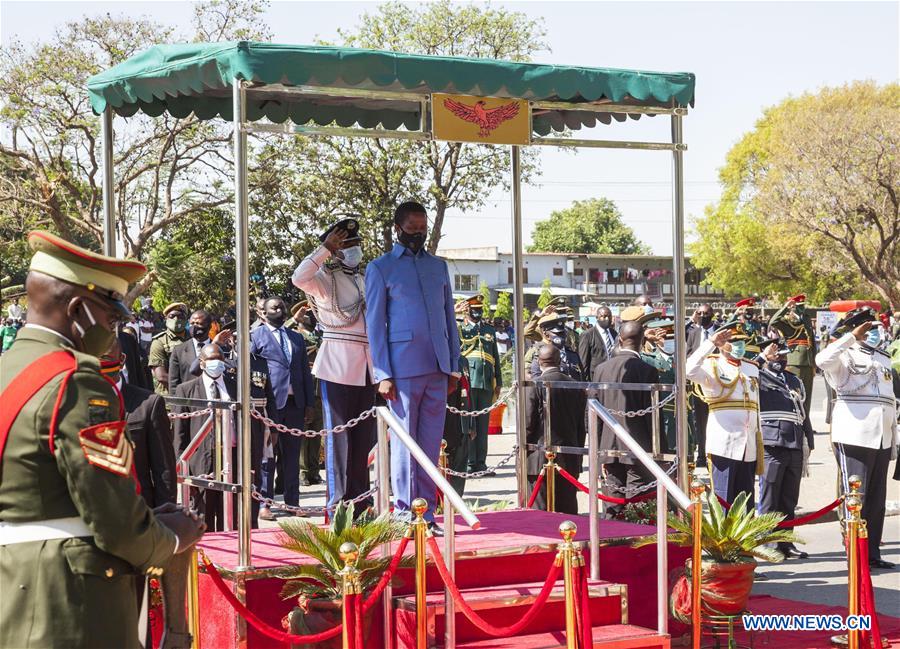 Zambian President Edgar Lungu (front C) attends a ceremony marking the 56th Independence Day anniversary in Lusaka, Zambia, Oct. 24, 2020. Zambia on Saturday marked the 56th anniversary of its independence from the British colonisation, with a low-key main event in Lusaka, the country's capital, due to restrictions posed by the COVID-19 pandemic. (Photo by Martin Mbangweta/Xinhua)

LUSAKA, Oct. 24 (Xinhua) -- Zambia on Saturday marked the 56th anniversary of its independence from the British colonisation, with a low-key main event in Lusaka, the country's capital, due to restrictions posed by the COVID-19 pandemic.

The event started with the laying of wreaths at the Freedom Statue in which President Edgar Lungu led senior government officials and diplomats whose attendance was restricted.

The event later shifted to State House for an investiture ceremony where various people were honoured for their distinguished service to the country, with only 100 people allowed to attend, unlike previous years where hundreds attend.

The events were broadcast live on the state broadcaster, the Zambia National Broadcasting Corporation.

This year's celebration is being held under the theme, "One Land, One Nation, Building Our Future, Proud and Free."

In his message on the eve of the anniversary, the Zambian leader said the government was determined to make the country a prosperous nation through improving different sectors of the economy.

Investments in various sectors such as roads and information technology were one way of growing the country's economy.

He further emphasized the need for unity, adding that it was the dream of the country's founding fathers to have a unitary and prosperous country where every citizen was equal before the law.

"Zambia shall forever be one country, one nation, indivisible and belonging to all of us as its citizens. It does not matter where one comes from, what language one speaks, what faith or political persuasion one holds. We all have a stake in our country," he said.

The Zambian leader called on the current generation to emulate the spirit of the founding fathers who waged the struggle for independence, adding that they sacrificed everything in order to liberate the country from the shackles of colonialists.

"They came together, regardless of their differences, because they wanted this country to be free. Free from colonial rule and free from exploitation," he added. Enditem