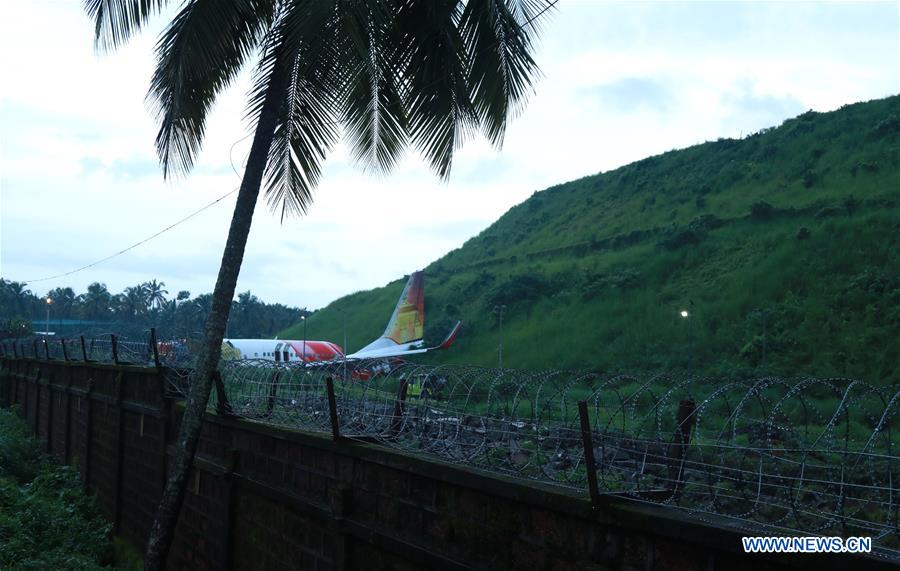 Photo taken on Aug. 8, 2020 shows debris of the Air India Express flight that skidded off a runway while landing at Kozhikode Airport in the Indian state of Kerela. The death toll in Friday evening's plane crash in south India has risen to 18, including the two pilots, as two investigating teams have reached the site to find out the exact reason of the mishap. (Str/Xinhua)

NEW DELHI, Aug. 8 (Xinhua) -- The death toll in Friday evening's plane crash in south India has risen to 18, including the two pilots, as two investigating teams have reached the site to find out the exact reason of the mishap.

Confirming the number of deaths, the country's Civil Aviation Minister Hardeep Singh Puri on Saturday tweeted, "18 people, including two pilots, have lost their lives, it is unfortunate. 127 people are at hospitals, others have been released."

The mishap took place at 19:41 p.m. local time when the Air India plane, a Boeing-737, flying from Dubai skidded off the runway at Kozhikode Airport.

According to Puri, as per the flight manifest there were 190 people on flight AXB-1344, including 174 adult passengers, 10 infants, four cabin crew and two pilots.

Immediately after skidding off the runway, the plane broke into three parts. Fortunately, the plane did not catch fire.

Though officially the cause of the accident has not been announced yet, media reports said that the pilots tried to land the aircraft amid heavy rains and it skidded off the wet runway. The plane's fuselage broke into three parts, with the cockpit falling in a 35-feet deep ditch hitting against one of the walls of the airport.

The civil aviation minister is leaving for Kozhikode to take stock of the situation. Speaking to reporters in Delhi, he said that pilots must have tried to bring the flight to the end of airport's runway where it skidded due to slippery conditions owing to monsoon.

The Kozhikode Airport is said to be a "tabletop airport" having a deep valley at the end of the runway.

The plane took off from Dubai on Friday evening and it made a hard landing at the Kozhikode Airport.

Quoting aviation experts, media reports said the ill-fated aircraft did not catch fire as the trained pilots could have switched off both the engines thus averting a bigger tragedy.

The plane was carrying people stranded overseas amid the prevailing COVID-19 pandemic, under the "Vande Bharat Mission" - a special mission initiated by the Indian government.

The Kozhikode Airport is said to be the seventh busiest airport in the country, and has the shortest runway.

There are three such tabletop airports across India, the other two being at Mangalore in southern state Karnataka and in northeastern state of Manipur. Enditem