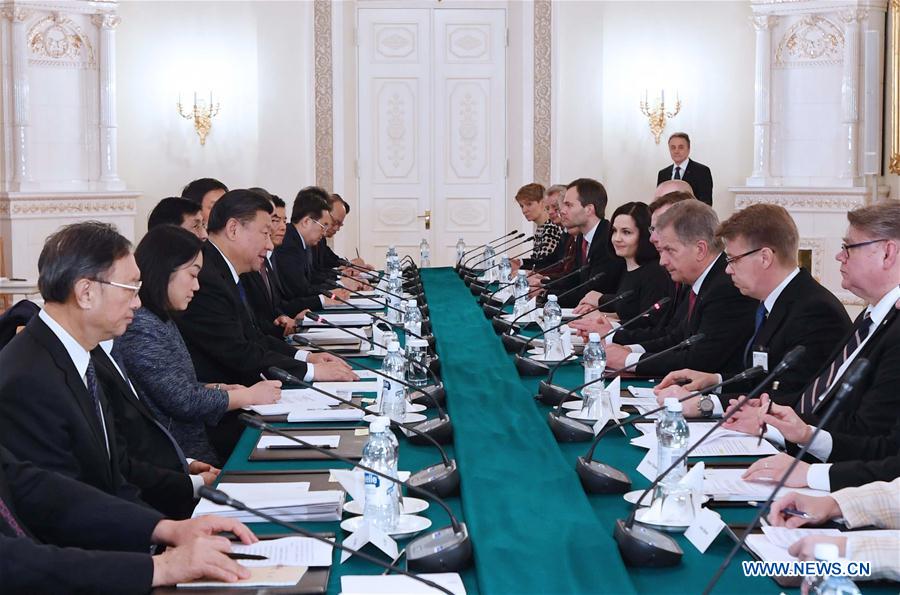 HELSINKI, April 6 (Xinhua) -- Chinese President Xi Jinping on Thursday concluded his maiden visit to Finland as head of state, with the two countries confirming the establishment of a future-oriented new-type cooperative partnership.

During the visit, hailed by local media as the most significant one of the year, Xi witnessed the signing of a host of cooperative documents and compared notes with Finnish leaders on bilateral issues and China-Nordic and China-Europe partnerships.

China and Finland agreed to upgrade their ties to a future-oriented new-type cooperative partnership in 2013 when Finnish President Sauli Niinisto paid a state visit to China.

On Wednesday, during a meeting between Xi and Niinisto, the two countries confirmed the upgrade and pledged to boost substantial cooperation in various fields.

China and Finland agreed to maintain the frequency of exchanges of high-level visits between the two sides to enhance mutual understanding and trust.

In a joint declaration, the two sides said they would continue to broaden and deepen practical cooperation in trade and investment, innovation, environmental protection and urbanization.

As China will host the 2022 Winter Olympic Games, the two countries agreed to cooperate more in winter sports and preparations for the Winter Olympics.

"Our relationship has become a model of friendly co-existence and mutually beneficial cooperation between countries that are different in population and size, history and culture, social system and development level," Xi said in a written message delivered at the airport upon arrival in the Finnish capital of Helsinki.

Xi's visit to Finland is his first trip to a European Union (EU) member state this year, and also his first visit to the Nordic region since he assumed presidency in 2013.

According to the joint declaration, Finland supports China and the EU in promoting connectivity between Asia and Europe, building an Asia-Europe grand market and increasing the flow of people, business, capital, technology and information between the two continents.

Xi, when meeting with Finnish Prime Minister Juha Sipila, said the development of Europe is conducive to promoting world peace and stability.

China expects Europe to be prosperous, stable and open, and the EU to develop further and become stronger.

He said China hopes Finland will play a more active role in boosting the development of China-Europe relations.

Noting that Finland holds the rotating presidency of the Nordic Council this year, Xi said the Chinese side stands ready to work with Finland to push for more fruitful results in China-Nordic cooperation.

China and Nordic countries enjoy huge potential for cooperation, where China could benefit from the countries' experience and advanced technologies, while the Nordics, with relatively small populations, could benefit from China's investment and market, experts said.

The Nordic countries, namely, Denmark, Finland, Iceland, Norway and Sweden, lead the world in areas like education, innovation and environmental protection, they noted.

"Nordic countries have advanced economies and strong innovation capacity. China and Nordic countries enjoy good relations and share a sincere desire for cooperation," Xi wrote in a signed article prior to the visit.

After his state visit to Finland, Xi will travel to the United States for a meeting with U.S. President Donald Trump on Thursday and Friday.

The meeting in Florida will be the first between Xi and Trump, the heads of state of the two biggest economies in the world.

Spotlight: Significance of Xi's Finland visit for bilateral ties and beyond

HELSINKI, April 6 (Xinhua) -- China and Finland confirmed on Wednesday the establishment of a future-oriented new-type cooperative partnership in a joint declaration during Chinese President Xi Jinping's state visit to the country. Full Story