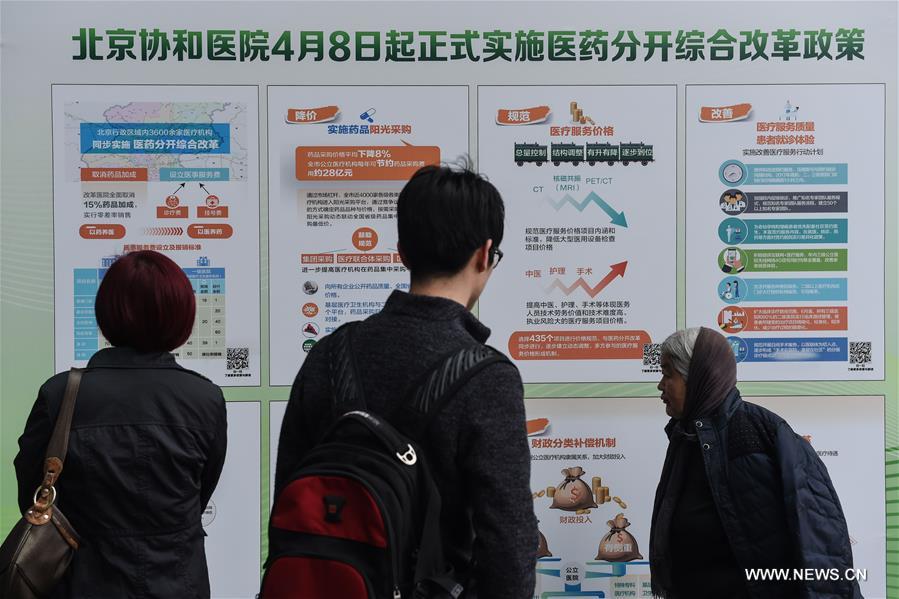 As of 6 a.m., 2,605 Beijing hospitals had switched to a new billing system, which replaced a registration and treatment fee with a higher medical service charge but scraped the previous markup on drugs, which was as high as 15 percent in the old pricing system.

The reform is applicable to more than 3,600 medical institutions citywide, while some 1,000 small village clinics are not yet equipped with computerized billing system, said Gao Xiaojun, spokesperson with Beijing health and family planning commission.

At Beijing Children's Hospital, one of the busiest downtown hospitals, dozens of children and their parents at the emergency room shortly after midnight.

One father, surnamed Zhang, said he had paid 10 yuan under the local medical insurance program to see a doctor, five times the former fee he had to pay out of his own pocket. "But it was not a big deal," he said. "We are quite happy that medication will be cheaper."

A mother who was collecting a prescription for her child commented on the average drop of 10 percent in drug prices.

The reform has reduced fees for the use of certain equipment, such as computed tomography (CT) and nuclear magnetic resonance (NMR), but increased charges for certain medical services that involve a lot of experience, expertise or staff time.

According to calculations, the overall medical costs for Beijing residents will remain balanced and there will be no increased burden on patients, said Fang Laiying, head of the Beijing municipal health and family planning commission.

Meanwhile, community hospitals and medical institutions have been given the same access to medicines that were once only prescribable by high-level hospitals.

More than 90 percent of Beijing's hospitals have taken action to improve their services since the reform plan was published on March 22, said Fang.