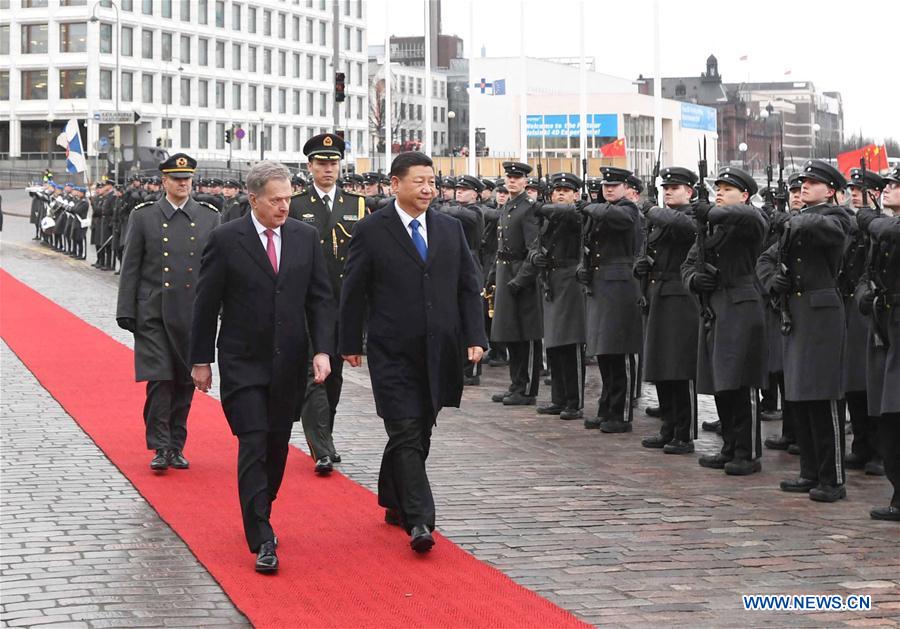 BEIJING, April 8 (Xinhua) -- As Chinese President Xi Jinping wrapped up his state visit to Finland and meeting with his U.S. counterpart Donald Trump at Mar-a-Lago resort in the U.S. state of Florida from April 4 to 7, Chinese Foreign Minister Wang Yi briefed on the achievements of the visit and the meeting.

The world is undergoing great changes and adjustments unprecedented in a century, Wang said. In terms of the evolution of the international pattern, the development of domestic and foreign policies of the new U.S. administration draws global attention, while new circumstances have occurred in the European integration process, he added.

President Xi's trip focused on two countries and covered two continents of Europe and America, said Wang, noting that the tour has attracted worldwide attention and had great significance.

The China-Finland relations has withstood the test of time and changing of the international situation and maintained steady and healthy development, making the two countries a model among relations between China and European countries, Wang said.

This first state visit of Xi as Chinese president to Finland started a new phase of bilateral relations, with confirmation of the establishment of a future-oriented new-type cooperative partnership in a joint declaration, which was the core political achievement of the visit, lifting the relations to a new height and offering strong guidance, Wang said.

The visit forged a new bond of people-to-people exchanges, Wang said. For example, as China will host the 2022 Winter Olympic Games, the two countries agreed to cooperate more in winter sports and preparation for the Winter Olympics, and will launch a China-Finland Year of Winter Sports in 2019, he said.

The visit stimulated new dynamic in China-Europe relations, Wang said. According to European media and people, Xi's visit conveyed confidence in the development prospects of Europe and indicated that communication and cooperation between China and Europe will be increasingly close, he added.

China and the United States are two major countries with global influence, and the gravity of their relations is self-evident, said Wang as Xi wrapped up his U.S. trip on Saturday after meeting with Trump.

It is not only in the interests of both peoples, but also meets the common expectation of the international community to keep China-U.S. ties on a sustainable, healthy, and stable track, Wang pointed out.

During his two-day trip to the southeastern U.S. coastal town of Palm Beach, Xi met with Trump on several occasions where they compared notes on bilateral ties and major international, regional issues of mutual concern, while reaching important consensus.

The two sides agreed that the meeting is positive and fruitful, said Wang, adding that the Xi-Trump meeting has enhanced mutual understanding and trust between the two leaders.

They introduced to each other their state governance thoughts, and domestic and foreign policy agendas, and the meeting increased mutual understanding and built good working relations, according to Wang.

During their talks, Xi extended an invitation to Trump for a state visit to China later this year, which the U.S. president accepted with pleasure. Wang said they also agreed to keep close contacts through meetings, phone calls, and letters.

The deeper the two leaders communicate with each other, the bigger role they could play in guiding China-U.S. ties, increasing the relationship's compatibility and tensility, and boosting the world's positive expectations for their development, the Chinese foreign minister elaborated.

Meanwhile, Xi and Trump courted the course and established principles for China-U.S. ties.

Xi said cooperation is the only right choice for China and the United States, saying that the two countries are capable of becoming great cooperative partners, while Trump said the U.S. side stands ready to work with the Chinese side to eliminate factors and issues that stands in the way of bilateral ties for a greater and better development of their relationship.

Wang said the two heads of state spoke highly of the historic progress the two countries have made, while agreeing to push forward China-U.S. relations from a new starting point, so as to bring more benefits to the two peoples and the rest of the world.

Wang said that both sides have launched priority mechanisms of cooperation. China and the United States agreed to facilitate the healthy development of two-way trade and investment, to advance negotiations on bilateral investment agreement and to promote pragmatic cooperation in infrastructure and other areas.

Mutual trust on military security is the basis of China-U.S. mutual strategic trust. Both sides would like to make good use of the joint staff dialogue mechanism to boost military communications.

Both countries intend to deepen cooperation in law enforcement and cyber security, and to boost cultural and people-to-people exchanges.

A regular China-U.S. dialogue mechanism is a significant pillar for the healthy development of bilateral relations and is conducive to smoother communication, strengthened mutual-trust and expanded cooperation between the two countries.

Wang said China and the United States have enhanced communication on global and regional affairs.

As permanent members of the UN Security Council and the two biggest economies in the world, China and the United States shoulder enormous responsibilities for keeping peace and stability, and promoting prosperity of the world.

During the meeting, the two leaders exchanged their opinions on the Korean Peninsula nuclear issue and other regional and global affairs of concern. Both sides agreed to expand cooperation at multi-levels to make contributions to world peace, stability and prosperity.

Wang said the meeting of the two leaders is in time and of huge significance and high efficiency. It has achieved the expected goals of enhancing understanding, building mutual trust and gathering consensus. It not only facilitates the smooth transition of China-U.S. ties, but also marks a good start for bilateral relations in the new era.

Both cooperation and divergence exist between large countries at the same time. In terms of China-U.S. relations, their needs for economic cooperation far outweighs competition, and the economic complementarity outweighs their divergence.

Wang said the historic significance of the meeting lies in both sides charting course, setting framework and making top design for the China-U.S. ties.

It is believed that the meeting will play a significant role in helping the two nations overcome difficulties, remove barriers and keep the bilateral ties in the right track. It will also make a positive influence in the peace, stability and prosperity in the Asia-Pacific region and even across the world, he added.

Xi introduced the Chinese idea of development to the foreign sides, noting that China will stick to the opening strategy of mutual benefits and continue to be a contributor to the world development, said Wang.

China is willing to combine its development with those of other countries and work together to build a community of a shared future for all humankind.

Xi pointed out that China has the confidence and capability to maintain a continuous and health economic growth, creating more opportunities and bringing more benefits for countries across the world.

During the communication with foreign sides, Xi was good at finding the common points of both sides' interests, policy ideas, and cooperations, advocating mutual respect, mutual benefits and win-win cooperation.

Noting different countries have different national situations, history and cultures, and development phases, Xi said that each country and people has the right to choose the social system and development path which is suitable for it.

Xi said the way which reflects the reality of a country is the right path of development, and the method with mutual respect is the lasting way of dealing with each other, according to Wang.

These expressions reflect not only the Chinese leader's self-confidence but also the philosophy of seeking common points while reserving difference, which win understanding and recognition of foreign leaders, said Wang.