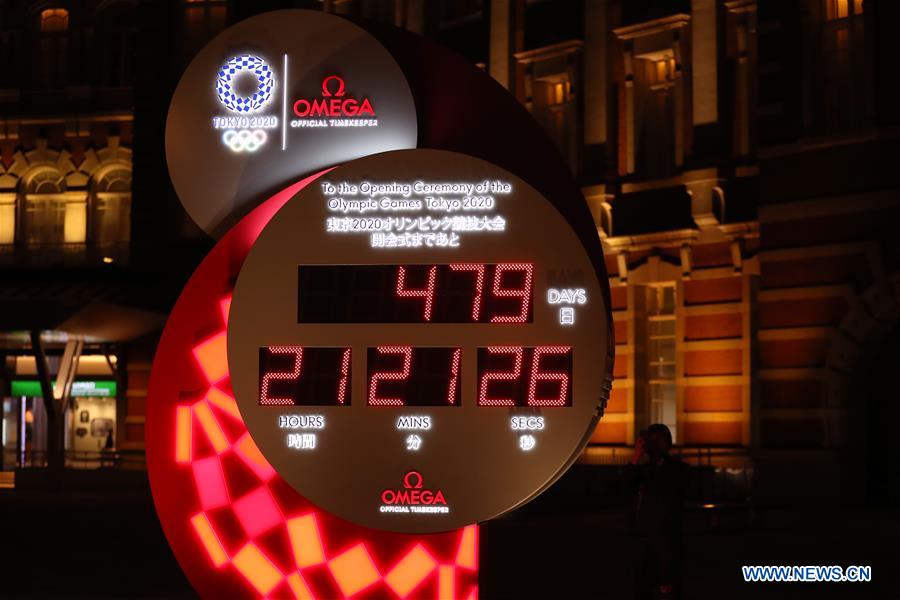 A countdown clock shows the adjusted time remaining for the postponed Tokyo Olympic Games outside Tokyo station, in Tokyo on March 30, 2020. The Tokyo Olympic Games has been rescheduled to July 23 to August 8, 2021, organizers of the Tokyo 2020 Olympic and Paralympic Games announced on Monday. (Xinhua/Du Xiaoyi)

HONG KONG, March 30 (Xinhua) -- The COVID-19 infections in Japan rose to 1,926 on Monday as the country released the rescheduled date of the postponed Tokyo Olympics, while Indonesia recorded the highest death toll in Southeast Asia with 122 cases.

Japan's health ministry and local governments said 1,926 people had been infected with the novel coronavirus (COVID-19) in Japan as of 6:30 p.m. local time on Monday, although Japan's top government spokesperson "categorically denied" a lockdown of cities was imminent.

The 2020 Tokyo Olympics, which were postponed last week over the growing COVID-19 pandemic, will be held from July 23 to Aug. 8 next year, Japan's local media reported.

The Indonesian government said on Monday the death toll of COVID-19 in the country climbed to 122, the highest in Southeast Asia, with the total number of confirmed cases jumping to 1,414.

Huang said the main task of the medical expert team is to help the Philippines by providing technical advice on epidemic prevention and control, as well as sharing medical treatment experience.

Thailand's Ministry of Public Health on Monday reported 136 new COVID-19 cases, bringing the caseload in the country to 1,524.

A total of 37 people have died of the COVID-19 pandemic in Malaysia as of Monday with 156 newly confirmed cases, bringing the total to 2,626.

Health Ministry Director-General Noor Hisham Abdullah said the ministry was working to expand the number of beds and the next two weeks will be crucial to "flattening the curve" of new cases.

The Australian government has announced a six-month wage subsidy package to support the economy amid the COVID-19 crisis, taking the total value of economic stimulus measures beyond 200 billion Australian dollars (123.2 billion U.S. dollars).

Social gatherings have been limited to two people in key Australian states, as the number of COVID-19 cases nationally passed 4,000 and virus-related deaths reached 18.

Two Chinese foundations, the Jack Ma Foundation and the Alibaba Foundation, have donated medical supplies including N95 masks and test kits to Myanmar.

In India the death toll due to COVID-19 rose to 29 on Monday as the number of confirmed cases reached 1,071.

According to the Indian health ministry, 100 people have been discharged from hospitals after showing improvement.

South Korea reported 78 more cases of COVID-19 compared to 24 hours ago as of midnight Monday local time, raising the total number of infections to 9,661.

The Lao government has decided to close all international checkpoints for passengers exiting and entering Laos, with goods transport still permitted.

The measures were imposed from Monday to April 19 and changes could be made in accordance with further announcement.

The ninth COVID-19 case in Laos has been confirmed on Monday.

New Zealand reported 75 new confirmed and one probable case of COVID-19 on Monday, bringing the total number of confirmed and probable infections to 589.

There have been no additional deaths related to COVID-19 after the death of a woman in her 70s on Sunday, Director-General of Health Ashley Bloomfield from the Ministry of Health told a press conference.

Vietnam's Ministry of Health on Monday confirmed six new cases of COVID-19 infection, all related to a Hanoi-based hospital, bringing the total in the country to 194.

The six patients are all Vietnamese workers having provided services to Bach Mai Hospital, where several staff and patients have been confirmed to be infected.