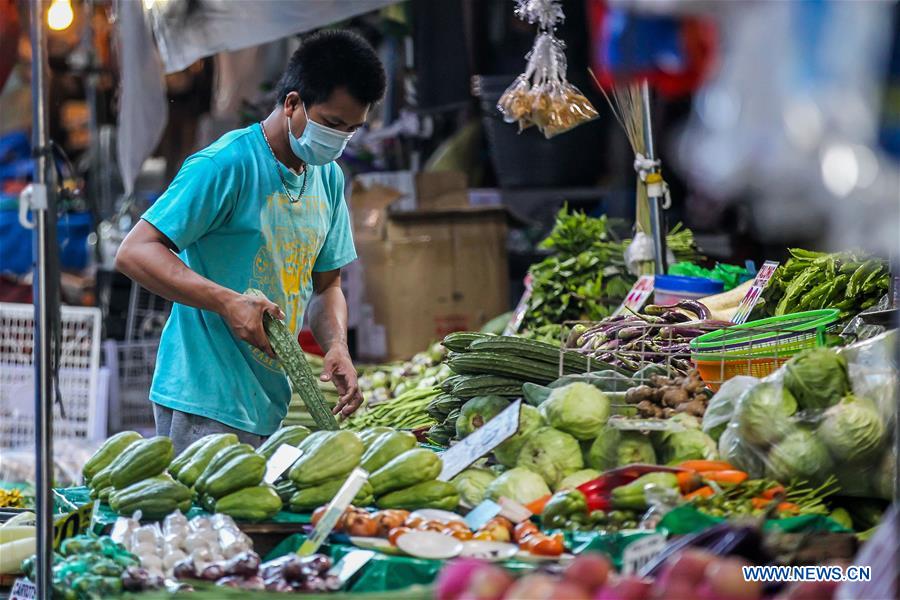 A vendor wearing a face mask prepares his vegetable stand at a market in Manila, the Philippines on Aug. 7, 2020. The Philippine Department of Health (DOH) said on Friday that it will focus on the elimination of cluster infections after the number of confirmed COVID-19 cases in the country surged to 122,754 with 3,379 new cases. (Xinhua/Rouelle Umali)

MANILA, Aug. 7 (Xinhua) -- The Philippine Department of Health (DOH) said on Friday that it will focus on the elimination of cluster infections after the number of confirmed COVID-19 cases in the country surged to 122,754 with 3,379 new cases.

The DOH said that the number of recoveries further rose to 66,852 after it reported 96 new recoveries.

The death toll also increased to 2,168 after 24 more patients died.

"There is ongoing community transmission. This means that it is becoming harder to clearly identify who infected our new cases or from which venues they are getting the infection," the DOH has said.

The DOH said its current data on clustering showed that these infections are mostly coming from the community, such as in households and from interactions and contacts with other residents.

According to the DOH, closed settings such as workplaces, health facilities, gyms, and nursing homes are "at higher risk because of the increased challenges in maintaining physical distancing, minimum health standards, effective implementation of workplace health and exposure screening as well as infection prevention and control practices."

Carlito Galvez, chief implementer of the national coronavirus task force, has said that common areas in workplaces such as canteens, shuttle buses and smoking areas are also "source of contamination."

"We're looking at the reasons why we have this kind of spikes and we saw that mass transport, shuttle buses and common areas where workers eat are very vulnerable," Galvez said, adding "it seems that workers lacked orientations on public safety and minimum health standard."

Health Undersecretary Maria Rosario Vergeire said the Philippines will now focus on how to eliminate clusters of infections.

In a virtual media briefing, Vergeire said government teams will visit 10 villages in 10 Metro Manila cities with clustering of COVID-19 cases in the next two weeks to find active cases in an effort to eliminate clusters of coronavirus infections.

She said active case finding means systematic screening and clinical evaluation of patients in the community. "We don't wait for patients to come to the system, we find them," she added.

In visiting the villages, she said the teams "do house-to-house symptom check, immediate isolation of symptomatic, and massive targeted swab testing in communities."

The DOH said the coordinated operations "will specifically target communities with high-risk transmission and those with limited capacities in terms of home quarantine and testing."

According to the DOH, the government teams will be mobilized on the ground to ensure seamless integration of COVID-19 responses under the so-called "prevent, detect, isolate, test-treat strategy."

As of Aug. 5, the DOH said the Philippines has a total of 100 licensed testing laboratories and conducted a total of 1,667,831 tests. The DOH added that it has recorded an average daily testing capacity of 27,800 within the last seven days.